A Beer Festival From Behind The Scenes 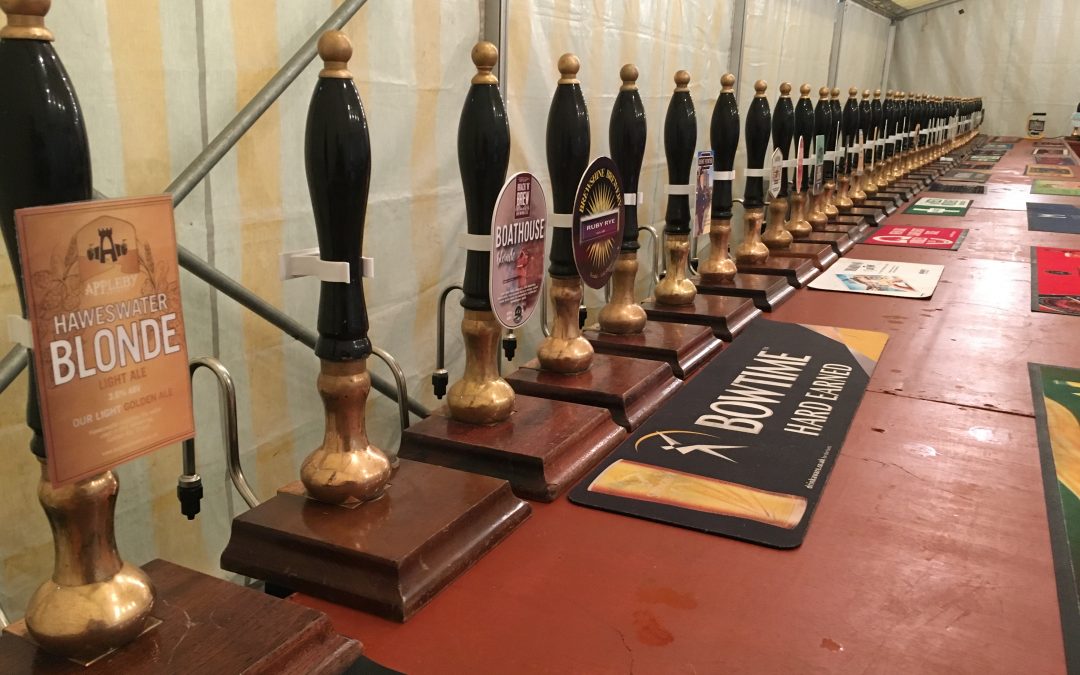 The Factory Tap was asked by Westmorland CAMRA to step in and provide a substitute event for their annual beer festival which was unable to go ahead this year at the usual location of Kendal Town Hall. Naturally we jumped at the chance to host such a well established event and soon, plans were well underway to try and make this festival something special.

Preparations for our festival started at another local beer festival: the Hawkshead Beer festival. It was good to see how another festival was set up, how it was run and of course see (and try) the beers available.

We soon decided that 60 beers would be a good number for the festival and all on hand pull, which despite the extra cost is well worth it. Being a substitute for the Westmorland Branch beer festival every year there is a “Best of the West… morland” (get it?) competition, so we knew we would have at least 16 beers from the area. Breweries were asked to supply a beer to be entered into that competition. The arduous job (no it was really) began to find the other 44 beers. Luckily having already built up a good relationship with various brewers over the past 2 years we were able to get some really interesting beers, many of which have not been seen in Cumbria before. A trip down to Manchester to visit the breweries, Se7en Brothers, Blackjack and Runaway produced some cracking beers for the festival including the delicious Marshmallow Stout from Se7en Brothers. A massive thank you has to go to Watson from Fell Bar in Kendal who managed to get us some exceptional beers from Almasty, Brass Castle, and Wylam breweries, amongst others. With so many beers we had to call in favours from both Tim from Chadwick’s Brewery and Phil from the newly opened Union for storing some of the casks.

Another major thought had to go into staffing. We knew that from the last beer festival we would be busy, especially at peak times such as Friday and Saturday night. Luckily as the festival was supported by CAMRA (a big thank you to them) we had help from their volunteers, who did the day shifts allowing our staff to be ready for the busier night times.

The set up started on the Sunday 4 days before the festival with the erection of the tent where the bar would be built, which would happen the following day, therefore allowing the beer a few days to settle. The bar set-up went pretty smoothly as we hired the experienced Mike Elliot (Beer festival Services) who took care of everything including hire of equipment, tapping the beers and all the set-up and break-down. Heaters were the next thing to go in the tent, being October we knew it could be cold. Extra glasses, a second dishwasher and till points were then added to the tent.

Finally after a lot of hard work we were ready for the festival to start, with trade night happening on the Wednesday. This was also the night where the tasting of the best in the West… morland would happen. It was my job to be the “runner”, pulling through the beers (checking them to see if they were drinkable, hard job I know) and taking them in jugs to the judges. After a lot of deliberating the winner was announced: Bowness Bay Brewing’s Steamer IPA, which was well balanced, very tasty and a great example of an IPA.

As predicted Friday and Saturday nights were the busiest with a relatively small contingent visiting us in the day time. A lot of people commented on what a good set up we had, which was very nice to hear.

Inevitably things go wrong, but we were well staffed and ready to deal with anything that might happen. One of our glass washers went down but we had lots of glasses as back up so we never ran out. All in all we had a very successful beer festival and it was great to see so many people come down. We should start planning for next year I guess…